The death of a young Montana rodeo star propels McCafferty’s terrific fourth mystery featuring artist, fly-fisherman, and occasional PI Sean Stranahan. When 16-year-old Cinderella “Cindy” Huntington is found dead in the chimney of a Forest Service cabin, it’s unclear if foul play is involved, but Cindy’s mother, Etta, hires Sean to do some digging. This means Sean will have to work with Sheriff Martha Ettinger, and things are tense between them since she recently called a halt to their romance. However, they undeniably make a good team, and what seems to be a straightforward death soon proves to be anything but. Sean and Martha find themselves embroiled in a family drama of epic proportions, as well as involved with a local “Mile High” club and an eccentric local mountain man. This is a must for fans of eclectic mysteries in which the setting is just as important as the characters.

Like Brad Smith and Elmore Leonard, McCafferty does a marvelous job of manipulating mood, moving from light to dark in such a way as to intensify both. This is the best McCafferty novel yet, and it’s a must for Craig Johnson and C. J. Box fans.

Stranahan’s fourth case blends humor with heartbreak, all flavors of eccentricity with a struggle for normalcy, and a natural backdrop that can make even the most powerful humans and their deeds look small.

Praise for The Gray Ghost Murders 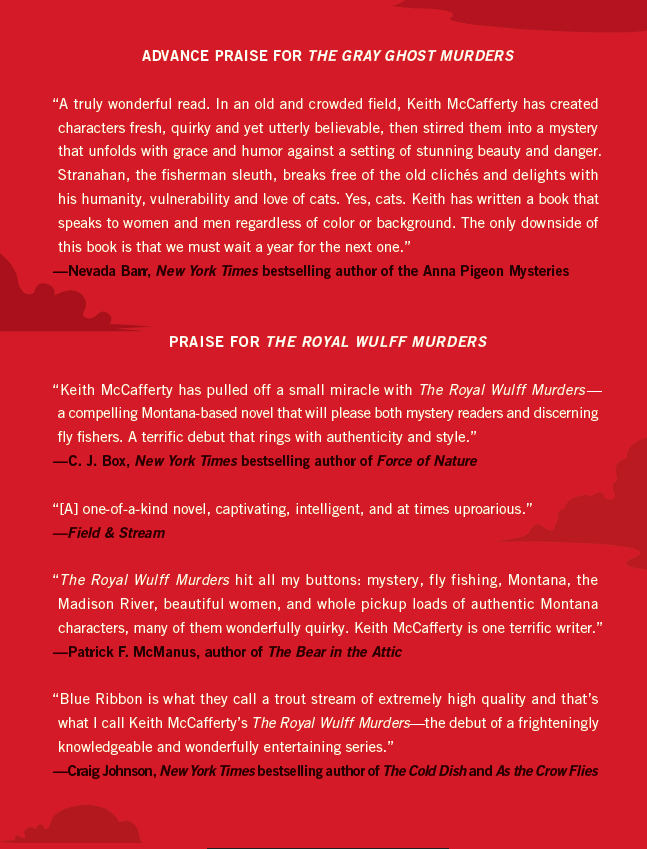 Even amid the serene trout streams of Montana, Sean Stranahan can’t seem to stay out of trouble—and there’s a heap of it in this bracing second adventure for the fly fisher/painter/PI (after 2012’s The Royal Wulff Murders). When the skeletal remains of two people surface in as many days on Sphinx Mountain, shorthanded Sheriff Martha Ettinger asks for Sean’s help investigating. Another case Sean’s already pursuing, concerning a pair of extremely valuable stolen fishing flies, provides the perfect cover for snooping—and he soon uncovers disturbing suggestions that someone could be hunting human quarry. Field & Stream editor McCafferty skillfully weaves Big Sky color, humor, and even romance (in the form of Sean’s stunning new girlfriend, Martinique, who’s bankrolling veterinary school by working as a bikini barista) into the suspenseful plot as it gallops toward a white-knuckle—if confusing—climax. The book’s biggest lure, however, remains Sean and his rugged band of Montana individualists.

Think big-city CSI teams have it tough? Their examinations of crime scenes are hardly ever interrupted by a grizzly bear like the one that sends Deputy Harold Little Feather to the hospital…Irresistible.
Read the entire review here

… a novel that is sure to capture new fans for one of the mystery genre’s rising stars.

Praise for The Royal Wulff Murders

* The Royal Wulff Murders
A fisherman snags a body from a river, a sultry singer asks an artist to catch a fish her late father caught and marked, and feisty Montana sheriff Martha Ettinger refuses to take the easy way out in McCafferty’s thoroughly entertaining debut. Sean Stranahan, a recently transplanted Vermonter now living in Bridger, Mont., owns the art studio Blue Ribbon Watercolors, whose window sign includes the odd postscript “Private Investigations.” Velvet Lafayette is the lounge singer with the unusual and fishy request that hooks Stranahan. McCafferty blends plenty of fly-fishing lore (the Royal Wulff is a lure) with a host of intriguing characters, including fishing guide Rainbow Sam, Cottonwood Inn owner Doris Sizemore, and Blackfeet tracker Harold Little Feather. Only the sharp-eyed observation of the medical examiner suggests the body was a murder victim rather than an accidental drowning. The eventual identification of the victim helps link Stranahan’s task to that of the sheriff. The vivid Montana setting is a plus. Agent: Dominick Abel. (Feb.)
Reviewed on: 12/19/2011

“I should have known that a woman doesn’t pay you to go fishing without there being some kind of catch.” This wisdom comes too late to save Sean Stranahan from the snares of a southern belle searching for her missing brother, but Keith McCafferty hits a bull’s eye with Sean’s story in his debut novel, The Royal Wulff Murders. A newly divorced transplant from New England in the throes of a precocious mid-life crisis, Stranahan moved to Montana to fish, paint and be a (preferably) retired private investigator. But when honey-tongued Velvet LaFayette offers him cash to locate her father’s old fishing hole, he swallows her story hook, line and sinker–only to uncover a twisted plot of tainted trout and multiple murders most foul.

Bizarre occupational pairings for fictional sleuths are beyond passé as a way for new writers in the genre to make their niche, but–like bacon and brownies–Stranahan’s odd mix of painter, P.I. and fly fisher works. It helps that McCafferty, an editor at Field & Stream, really knows his trout, and life in Bozeman has obviously acquainted him with the ways of Montana. He writes with both a love of nature and an obsession for detail common in the outdoorsman. Add the backwoodsy feminism of Sheriff Martha Ettinger, and the mystery is a good fit for enthusiasts of Nevada Barr who have read through all the Anna Pigeon novels. Packed with wilderness action and starring a band of stalwart individualists, The Royal Wulff Murders will have readers begging McCafferty for more. –Tom Lavoie, former publisher

Discover: A secret world of trout and trouble in a rugged Montana mystery from a debut author.

from the February 1 issue
It’s all about the trout. When sultry singer Velvet Lafayette hires Montana PI Sean Stranahan to fish—and find the exact spot her late father went fly-fishing a year earlier—Sean wants to believe her. But the real story involves her brother’s recent drowning death, deemed suspicious by local law enforcement. Sheriff Martha Ettinger fishes also, and she knows that a key clue is a particular type of fly, the Royal Wulff. The second clue is whirling disease, a parasitic malady that has decimated the local trout population. When Sam, a fishing guide, is shot, Sean knows the killer is panicking about possible witnesses. If Sean or Martha can figure out why fishing is bringing out the hunting instincts, they will be closing in on the perpetrator. VERDICT McCafferty’s superb outdoor writing (not surprising for an editor at Field & Stream magazine) feels like an academic mystery thanks to a complex research topic that sometimes dilutes the mystery plot. Recommend this debut to lovers of environmentally themed mysteries by such authors as C.J. Box, but don’t forget Victoria Houston’s fly-fishing Wisconsin sheriff (“Loon Lake Fishing Mysteries”), if readers want to continue along that vein.

Keith McCafferty makes an impressive debut ….  the people here are all solid creations, sometimes prickly but always engaging, characters readers will be more than happy to see again. — P.G. Koch

Enter the bookloons.com contest for your chance to win a copy of the book!

I know nothing about Montana (the setting for this story) or fly fishing (the central subject of the story) or anything else that came up in this book, yet I enjoyed it. The mystery is a good one…

Finally, the descriptive and picturesque setting for The Royal Wulff Murders is almost a character in itself, an integral part of the story and one that enhances the overall reading experience. This is a good, solid start to this series.

I was devouring the pages at a pretty rapid pace …. If you are a nature lover who likes a fine mystery you will really enjoy this book. 4 stars.

The Royal Wulff Murders: A Novel

is a well-written story with great descriptions and sense of place. The mystery involves fly fishing, and for outdoor enthusiasts, there’s a lot here to enjoy. — Kae Cheatham

Praise for The Royal Wulff Murders

“The Royal Wulff Murders hit all my buttons: mystery, flyfishing, Montana, the Madison River, beautiful women, and whole pickup loads of authentic Montana  characters, many of them wonderfully quirky. Keith McCafferty is one terrific writer.”—Patrick F. McManus, author of The Bear In the Attic and The Huckleberry Murders

“Blue Ribbon is what they call a trout stream of extremely high quality and that’s what I call Keith McCafferty’s The Royal Wulff Murders—the debut of a frighteningly knowledgeable and wonderfully entertaining series.”—Craig Johnson, author of The Cold Dish and Hell is Empty

“The dead man whose eye is skewered with a stick and who has a trout fly hooked into his lip sets the tone for this muscular, original first novel. McCafferty is one of the country’s most convincing writers on survival and life in the wilderness, and this mystery is an impressive foray into fiction—taut, often highly amusing, filled with memorable characters like the lady sheriff and the former private eye who paints and fly fishes—and it’s a real page turner.”—Nick Lyons, author of My Secret Fishing Life

“The last time I fished the Madison River it was high, fast, and dirty—words that come to mind for parts of McCafferty’s tangy debut mystery.  But there are also episodes of angling wonder and Montana beauty, rendered in prose so gorgeous they make this book a truly rare catch, the page-turner that doubles as a poetic meditation.  (Now how about taking me out on the river, dude?)”—Mark Kingwell, author of Catch and Release: Trout Fishing and the Meaning of Life

“What fun it is to visit my favorite fishing spots , not in a guide-boat  but in a wonderful murder mystery.”—Henry Winkler, author of I’ve Never Met an Idiot on the River

“Keith McCafferty has pulled off a small miracle with The Royal Wulff Murders — a compelling Montana-based novel that will please both mystery readers and discerning fly-fishers.  A terrific debut that rings with authenticity and style.” — C.J. Box, NYTimes bestselling author of Back of Beyond and Force of Nature